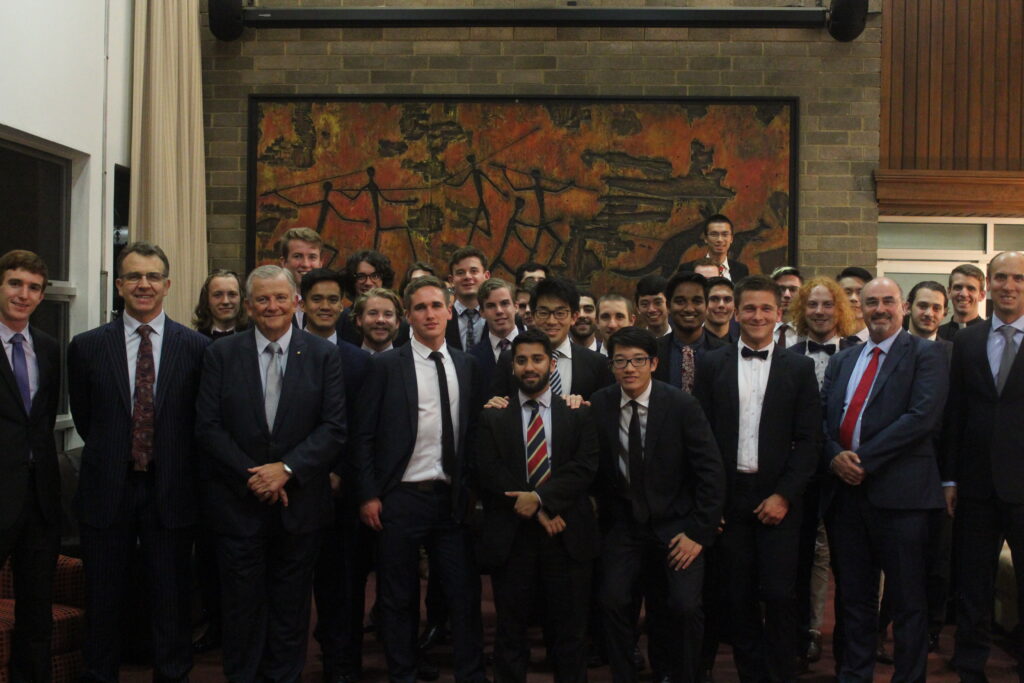 On 24 April 2019, former NSW Police Commissioner Ken Moroney AO APM attended the Wednesday night formal dinner at Warrane. He held the role of Police Commissioner from 2002 to 2007 and was in the police force for a remarkable 42 years. He has been frequently commended and awarded for his outstanding leadership abilities, and it’s no wonder considering that his experience includes the Thredbo landslide disaster in 1997 amongst others. Since retirement, he has still been busy – working with state and federal agencies, charities, the NSW Ombudsman; and currently some civil work with a diocese in country NSW.

Moroney started off by explaining to the young men of the college his reasons for retiring. “I said publically it was time to retire in 2007.  The real truth was that my late wife Beverley had developed cervical cancer… she had followed me and raised my three boys for 48 years, supported me throughout my career and unhesitatingly I knew that this my chance to repay her for all of the support she had provided me, and equally, our family. I sincerely hope that at that point in time, when some of you choose a spouse, that you are blessed in having a spouse that is supportive of you in every way possible.”

“So, in 2007 as Beverley’s cancer started to develop, it was time for me to leave the NSW Police Force… it was a decision that I believed in those circumstances was the right one. Just prior to her passing away, some four years ago next week, a dear friend who is a parish priest… came and gave Bev the last rights of the Catholic Church.  Later, I said to her, ‘Are you frightened?’ Because she knew the end was near. And it was her stoic and calm response that was typical of her, and really has sustained the three boys and myself over this time. And she simply said, ‘No, I’m not frightened, because I think I know where I’m going’ … and what she was saying really was that she had an inner faith that sustained her throughout her life, but also particularly at that part of it… a moment that will come to all of us.”

Faith in what you’re doing

Speaking of faith, Moroney really tried to instil in the young men the importance of believing in themselves. One instance in which he had to do that was when choosing his career path – in his typical Irish family, there was an expectation that as the eldest child in the family, he would go on to become a priest or join a religious Order. And yet after two and a half years in the seminary, he realised it wasn’t his calling (much to his mother’s dismay) and went on to join the NSW Police Force of almost 20. “It sounds corny, but I thought as a police officer I could make a difference.  I thought I could add value to the organisation as I then understood it. And really, at 19 plus years of age, I realised how little I knew of life.  In hindsight, I knew nothing.”

The first station Moroney worked at was in the western suburbs of Sydney, followed by 20 years in country NSW where his sole ambition was to be a Sergeant-in-Charge. He was happy to eventually realise this dream but then was called back to Sydney by the then Commissioner of Police, Mr John Avery – a man of great faith and conviction. In 1991 he was appointed as the Chief of Staff, before going on to become Commissioner in 2002. He commented, “I reflected at that time on the words of the then-Chief Instructor of the Police Academy in 1965… who told me I wouldn’t amount to anything… Well I don’t know where he is today, but I know what I was able to achieve…what I want to keep coming back to is having faith, have dreams, but above all else believe in yourself.”

Even when recounting experiences such as working in the aftermath of the Thredbo landslide, Moroney kept the emphasis on having faith and self-belief despite the challenging circumstances around you. “What is important in all of that though, is that you have a belief in yourself… a belief in what you’re doing… and the belief comes in a large extent from yourself. Faith in what you’re doing, faith in your profession, and equally more often than not, a religious faith…” he said.

Some words on communication and mentorship

Moroney went on to tell the young men about some professional situations he had encountered where communication played a key part. “It’s very important to be able to communicate,” he said. “Speak to people the way you want to be spoken to yourself. If you want to be communicated with effectively, then communicate effectively with other people with patience and tolerance and understanding.”

Moroney finished by stressing the importance of mentorship. “Above all else… we all need an ability to have a mentor, a friend. He or she may be a professional friend, or a family friend. Might be your parents; a relative; a brother; a cousin. It might be somebody within your environment. There is great relief to be had being able to talk honestly, openly and frankly with whoever it is you choose to be your mentor… there is no issue or problem that you face that someone, more often than not, hasn’t faced before. So you have to be able to communicate with people for your own mental health benefit.”

“If there is one final message that I would leave you with it is the importance on ongoing education in your chosen profession.  Continuous learning makes us who we are and who we aspire to be”.