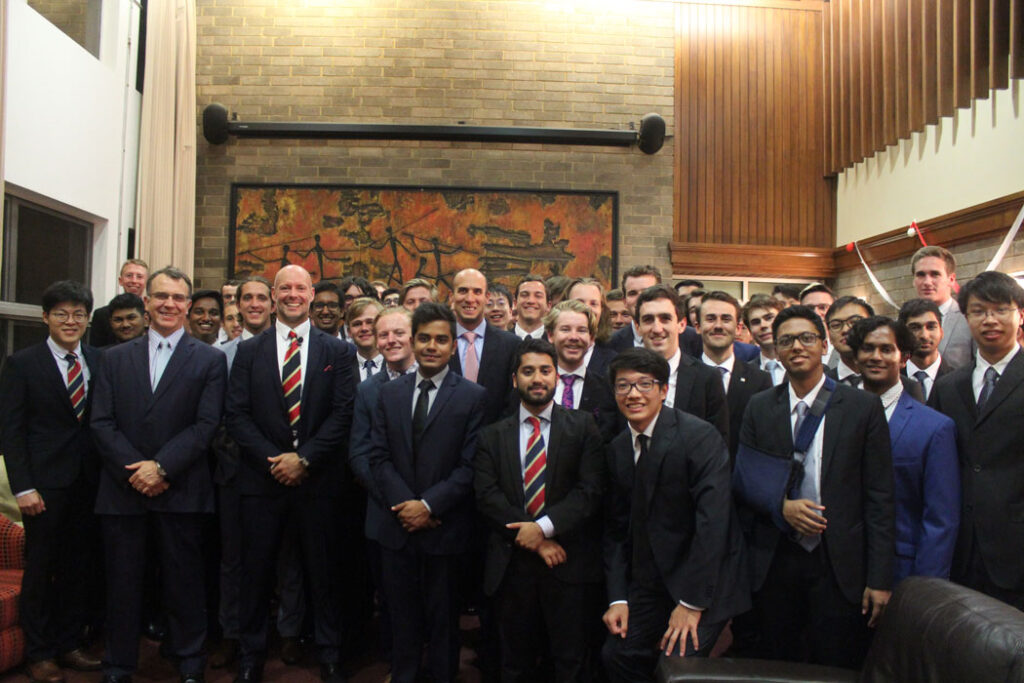 Tips for personal resilience with a former Marine Commando

On Wednesday 27 February, Warrane College invited former UK Royal Marine Commando Scott Howe to be their formal dinner guest. A member of the Commando Forces for 18 years, he is now the Director of Asque, a leadership and team building consultancy which equips companies to outperform their competitors and achieve the extraordinary.

Howe came to talk to the boys about personal resilience, and started by asking what the term meant to them. He was answered with “the ability to come back after a failure.”

“I came up with four, and I will read them,” responded Howe. “The ability to carry on when things are bad or not going the way you planned; the ability to focus on solutions when panic sets in; the ability to receive negative commentary, not let that affect you, and learn from it; and the ability to bounce back after a defeat.”

Using stories and anecdotes from his own life, Howe wanted to bring the practice of personal resilience to life for the boys.

Howe explained to the boys that he was a very inquisitive child, and would get bored quickly. At the age of four, he prodded his sister while she crocheted, mostly for something to do. In response, he got a needle to the back – something, he later realised, that gave him a phobia of needles. Fast forward to being in the Corps, and Howe had no choice but to get necessary vaccinations, shoulder to shoulder with everyone else. Every instance of this required him to use all of his resilience.

Focus on solutions when panic sets in

An incident when he was a child started him down a path of using physical means to deal with problematic people – starting with punching a kid that was giving him trouble at age six. He thought this was the way to get the results he wanted.

“But that isn’t what actually happens,” he told the boys. “What happens is, when you start doing that, you start setting a chain of events. The events are that you consistently have to look over your shoulder… Your resilience to words is really, really straightforward… In bullying, resilience is about piecing together some course of action that isn’t going to be resorting to violence. The power of words is very strong. The power of actions is weak.”

Bounce back after a defeat

Howe told the boys about how as a kid, academics was not his thing, but sport was. “I could do sport, and I could do it really well. So you have state representation here, back home it’s ‘county’. So I was county at cricket…squash…tennis… So I thought at the end of school, what I’ll be is a professional athlete.”

The problem came when at college, and specialists advised him that his knees were done – their cartilage was breaking down and they couldn’t be repaired. But, looking for more answers, he saw a GP who advised him to do squats to strengthen his knees, and squats he did! Whether this doctor was right or not, Howe felt he had given him another opportunity, and he ended up doing plenty which required strong knees down the line. “It’s about overcoming moments of adversity…it’s about your own internal resilience,” he said to the boys, explaining that they should have a holistic approach to life as both their physical and mental capacities are needed to bounce back.

Receive negative commentary, not let that affect you, and learn from it

Howe talked to the boys about having the resilience to see past the fear and back themselves in any situation life might throw their way.

Coming out of his military career was another tough situation, since assimilating into the rest of the world was hard to do. “There’s this cycle of negative commentary about what skills and attributes former military people can bring to the civilian workplace that you have to break, and it’s really hard,” he said to the Warrane boys. And that’s why he now works for a mentoring group, one like 3600 others in Australia which exist to help veterans.

“The work I do now – I go into big organisations… because they don’t know what’s going wrong – costs are going up; revenue is going down… I have to go in there and investigate. More often than not, it’s happening because they haven’t got leaders in positions of leadership. They have managers… making sure processes are being followed, but nobody who can inspire, enthuse and motivate other humans… with skills of character, skills of resilience, skills of making other people feel safe.”

To finish off, Howe was asked about resilience in everyday life – about getting through the seemingly little and mundane things of the day or week. “It’s about personal leadership, and your impact on other humans. If you not getting out of bed is going to have a negative impact on your team, environment, yourself, well that’s a bad thing, you need to recognise that. It’s takes a bit of self-discipline…”

“If you recognise the impact you have as an individual in the grand scheme of things, there is always a reason to get out of bed… See the big picture. Recognise that there’s a bigger part to what’s happening.”