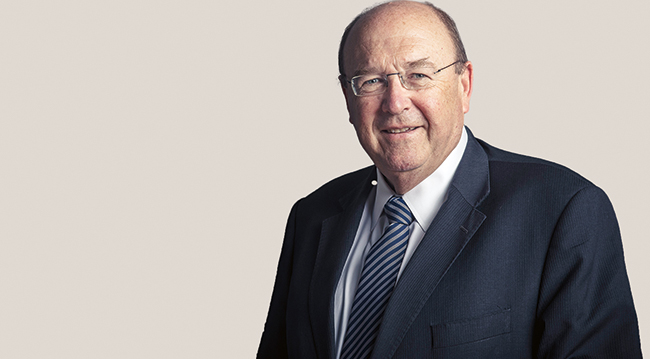 On Wednesday 20 February 2019, Peter Warne, Chairman of Macquarie Group, joined the young men of Warrane College at their weekly formal dinner. With extensive knowledge and experience in financial services and investment banking, he’s held a number of senior roles including being a Director of ASX Limited since 2006.

Warne opened up the floor to a Q&A style session and answered questions to do with regulation, dealing with financial difficulties in the industry and more. But he also spoke on topics that could resonate with any student about to embark on their career.

On staying motivated all semester and beyond

“I’m offering these pearls of wisdom, if that’s what they are, from the tail end of my career, while you’re all starting out at the beginning of your careers,” Warne said. “But at the back end of my career, if I remember some of the most vivid memories, some of those would be my time at university. You have got a wonderful opportunity. My strong advice would be to seize that opportunity with both hands and work hard, but make sure you enjoy it, and take as much advantage of the experiences that you’re going to be presented with over the coming years. They will stick with you forever, and so don’t let that opportunity slip past…”

He continued: “In terms of career advice… you are going to have a new career every 2-5 years… I would counsel you to position yourselves and your studies to provide you with the maximum optionality going forward. To study things you enjoy; you find interesting. You’re more likely to do well at those things, you’ll learn more. And I’ll say something that will probably horrify some of the staff and some of you – most of the course material that you learn at university, in the final event’s probably not going to help you that much. What you will learn at university that will really help you, is that you’ll learn how to learn, and that is the most critical thing.” Warne explained to the boys that when it came to hiring graduates, they’d spend the first six months teaching them: in the end they were hiring people who could learn, which is a critical quality in the workplace.

On being asked his most memorable mistake in his professional career

“You try and shut out the real bad ones,” laughed Warne at this question.

“Well, I have made plenty. Probably people mistakes… Where you’ve invested in someone who on paper looked really good but you had a gut feeling that they weren’t as good as they seemed or pretended to be, and you’ve found out later that you should have listened to your gut rather than listening to the ‘marketing’… I think there would be a portfolio of mistakes where I should have known that… I find people mistakes are the ones you really regret. To invest in someone and have them let you down is very disappointing… That really takes a toll on you, especially when you get more senior in organisations, and managing people and investing in people is the core of what you do; to make that mistake really hits home.”

On being a balanced employee

When asked whether employers actually care about volunteering appearing on a resume, Warne had the following to say. “I’d say when we’re hiring graduates, what we’re really looking for is a balanced individual. We don’t want someone who has just studied 24 hours a day, 7 days a week and has no other life. Volunteering versus some other activity, that doesn’t matter so much… it’s really about demonstrating balance in your life; that you are capable of a whole range of things… They still had to prove that they had the ability to learn and had achieved, but it wasn’t everything… So I think it’s that broader issue of what else have you done with your life, to demonstrate that you are capable of doing a whole range of things?… We’re still learning that the ‘soft skills’ like teamwork, ability to present in public… those sorts of things, are just as important.”

“I think it [leadership] has [changed] in all businesses – far less command and control…and to a large extent they were unaccountable in lots of ways,” explained Warne to the boys. “Now…the opinion of the staff, of the team, external stakeholders…community standards and expectations, politicians and regulators, customers, staff – all of those things have a lot more input into the way organisations are run. And we have to take account of what they think, and I think that’s a plus. The world is a better place doing that, but it’s certainly a very different organisation… from the way things were.”