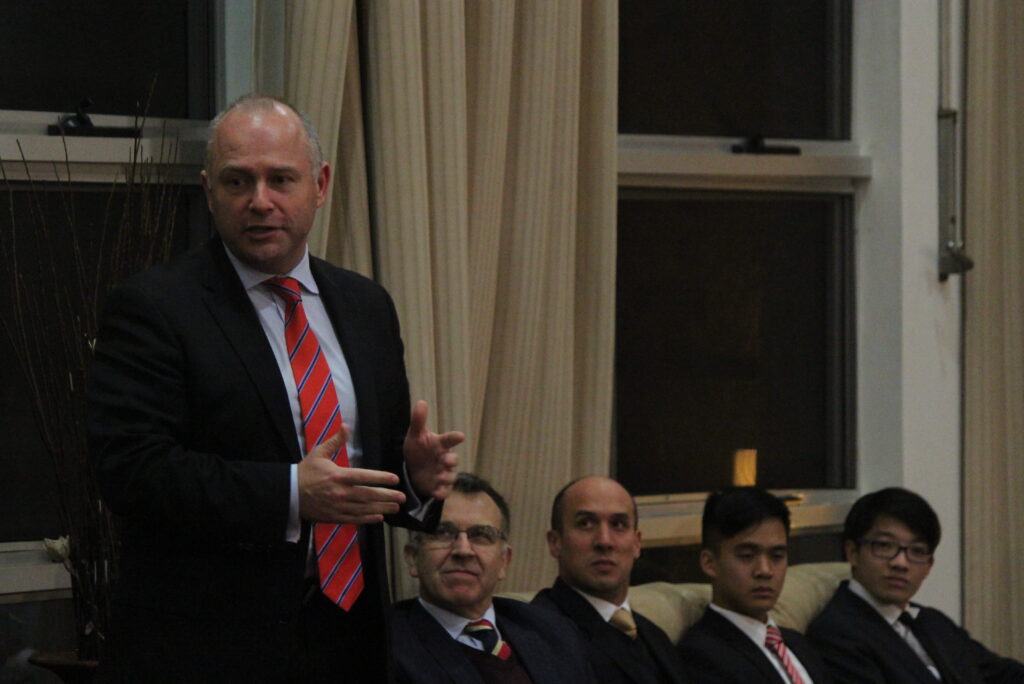 On Wednesday 5 June 2019, Warrane College had their first formal dinner of the semester. They heard from Dallas McInerney, Chief Executive Officer of Catholic Schools NSW (CSNSW) since August 2017. CSNSW is the representative body of the state’s almost 600 Catholic schools and their owners, as well as the system authority for approximately 550 NSW Catholic diocesan schools. Prior to this, Dallas worked in financial regulation and public policy across the government and private sectors.

McInerney spoke to the young men of the college about the good foundations he had in life, and how that motivated his work today. “I think it’s really difficult for a young person to go out into the world… and be true to what they’ve learnt at home. How can I replicate that? How can I honour what was given to me from my family… I think that’s one of the things that motivated me to take the current job that I have,” he said.

McInerney started by telling the young men about the good foundations he felt he had had in life. “I have been very lucky throughout my life, and the first bit of luck I had was the family I was born into,” he said. “I had two parents, both of whom came from very, very modest means… My grandmother invested all that she had, time and otherwise, into my mother’s education. It was that experience that my mother had that she was determined to pass onto her children… My father had left school at 14… I say that background to make the point that whatever gifts, or enjoyments or benefits you have; you’re very temporary custodians of them.”

McInerney went on: “The other things which put me in good stead were the robustness of living in community as one of nine kids; the boys’ school with hundreds of others; it does give you an early outlook on life. It can strengthen you, make you more robust. And I’ll always be grateful for those early opportunities because you were tested and you were stretched, and you did learn about self-doubt and criticism and not receiving always the best treatment from your fellow man. And to have those experiences early, I think, is important. Now that’s not to say that everyone should go through a god-awful existence, but I’m glad that I had those challenges.”

He said that even with a good foundation, the challenge for young people is sticking to how they’ve been brought up when the world around them is so different. “How do I make sure my children have the same experiences and formation that’s put me in such good stead, when every other part of society is sending them completely alternative messages to the ones we’re trying to send them at home?… It’s unrelenting, because I would have less facetime with my son and my daughter on a daily basis than they would with their iPads. So their view of the world is more influenced …by that than me.”

“Never give up the opportunity to do something different or talk to somebody who’s either smarter, older, or more experienced.”

Some pieces of advice

McInerney also gave the young men some advice on friendship and mentorship.
“A point I would make is I truly believe the friends you make at this age, now, are the best friends you’ll have ever. My best friends that I stay in touch with, value, love and interact with, and actually pine for… are the ones I met between 18 and 25… Life does get very busy… and the opportunity to make new friends becomes very limited… The beauty of having friends like that, from these formative years, is it doesn’t really matter if you don’t talk to them every day… they do give an extra dimension,” he said.

McInerney went on, “The other thing I’ll make comment on… is never give up the opportunity to do something different or talk to somebody who’s either smarter, older, or more experienced. I saw too many of my peers who were a little bit disdainful of people who were older than them… Some of the richer discussions I’ve had personally and certainly professionally are with people who have been there, experienced and really gone through with their careers, and now just want to share time with you. It’s not something that we do well in Australia with respect to valuing that great corpus of experience… So if there’s an opportunity to find yourself a mentor… I would definitely recommend that you try to regularise that… I have so many examples of times when people have given me counsel when I didn’t even know I was seeking it.”

He also advised the young men to learn to listen, and to really value their time in the college. “I was reflecting on some of the people who have come here before to share their thoughts… I was taught very early to remember that you have two ears and one mouth and to use it in proportion, and it was good advice because I’m one of nine children in my family… And coming back and joining you for dinner this evening did return to me the sense of enjoyment in numbers, and how joy shared is joy doubled, and there’s no substitute for being with your brothers and sisters… Cherish your time here.”