Lessons from the lab with biochemist Professor Tony Weiss 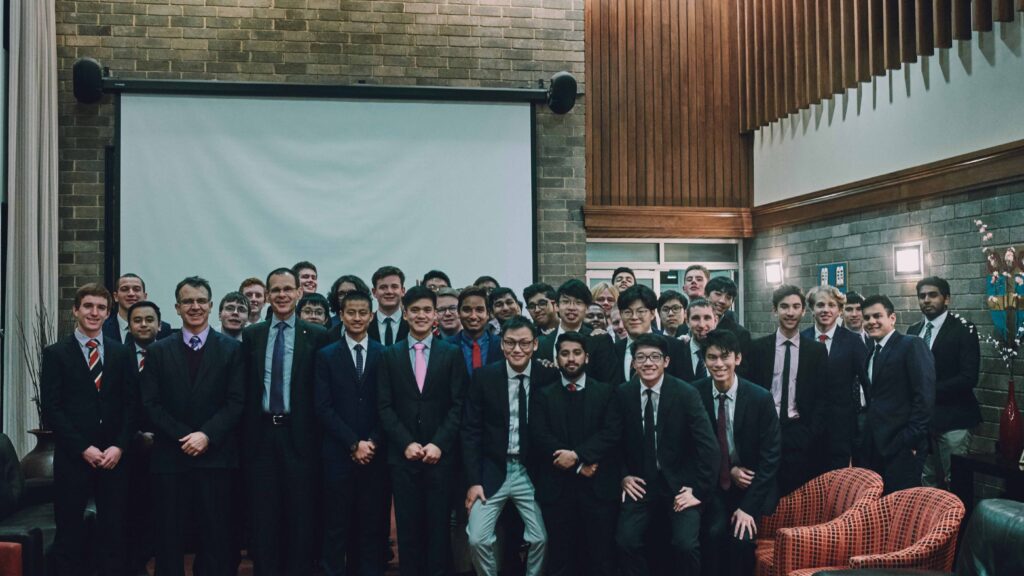 With a long list of qualifications next to his name, Weiss has received an even longer list of awards, and is President-Elect Global of the Tissue Engineering and Regenerative Medicine International Society (TERMIS). He founded the biotechnology clinical stage company Elastagen Pty Ltd which was sold to Allergan in one of the largest transactions ever completed in the Australian life science sector.

As an inventor with 105 awarded international patents in 19 patent families, Weiss, who is on 10 editorial boards in the field’s leading journals, spoke to the young men about his work.

At his laboratory at Sydney Uni, Weiss and his team have been looking at how human tissue gets made, especially elastic tissue, since it could intervene to repair many parts of the human body.

He described it to the young men. “We asked the question, what is a common building block for a lot of different functionally elastic parts of the body? And it turns out that it’s called elastin… an elastic protein that’s found for example in skin… As we get older, almost no new elastin is made… Imagine that you wanted to examine blood vessels and how to repair them… the aorta has a lot of elastin… Elastin is deposited mainly before we’re born and in the first few years of life; it’s just a trickle feed later on. So we’re in there for the long haul, we need that elastin to persist for pretty much a lifetime… that’s an extraordinary demand to make of any system!”

Weiss went on, “The difficulty is that elastin has been difficult to repair… our bodies aren’t trained up to make elastin beyond those very early stages of life… So the question we asked is can we make the building blocks that are needed?… So we found the very basic building block of elastin… a tiny molecule… and what we did was to take a synthetic gene and inserted into a bacterial cell… and was trained to make this elastin protein… and then we’d break open these cells.”

Weiss and his team worked to figure out then how these building blocks assembled in nature. Over the years, and through the work of remarkable people in the lab, they’ve found the best conditions– including the ideal temperature, pH and so on –for these to snap themselves together and assemble.
With grants from Australia and around the world, the team was able to further this research and take the concept from grey matter to the establishment of a successful company. “It’s really invigorating to see something go from a concept to something that can really make its way onto hospital shelves; onto other shelves as well,” he said.

As well as talking about his research, Weiss spoke to the young men about other broader themes as well. When asked about working in a lab environment on a big question despite setbacks along the way, he said the following to say: “It’s a belief it’s going to work out in the end… The nature of trying to progress things has been compared to a rollercoaster ride, and I think actually there’s a certain kind of mindset being able to cope with that – you know, 10 years on a rollercoaster can be quite dizzying. Just knowing that you will get there at the end, somehow, keeps you hanging on for dear life. Okay, when you’re going through the ups and downs, sometimes you wonder … I remember telling my wife Jacky in 2012: ‘This will be the year it’s all going to work out, you watch!’ And I remember her asking me every year subsequent to that, ‘Is it 2012 yet’? So you just really have to love the rollercoaster, you’ve got to love the adrenaline, but most of all, know in yourself that this makes sense.”

Weiss spoke also about backing his team and encouraging their input. “There’s a selection sieve for who’s in the team, and once they’re in the team you’ve got to back them up, you’ve got to have belief in who they are,” he said. “My universal perspective is, if someone comes up with an idea, I’ll listen first and encourage them to flesh out the idea. And if the idea makes sense, which it usually does, we run with it. I see myself as more of an orchestra conductor. The idea is to make sure that the moving parts all harmonise and go in roughly the right direction – the bigger picture stuff… and there’s an enormous sense of gratification for people when they think ‘Gee, the boss understood what I was saying and then ran with it too’. I find that people do better under those conditions.”

He also answered a question on how the lab differs in a university and business setting, when a business is much more interested in the commercial outcomes. “But actually I think you can connect the two… The truth will prevail, the science has to be robust, the medical outcomes are worthwhile. And it’s amazing how that starts to become part of the culture as well…You can actually start that culture from very early on … ‘Let’s remember why we’re doing this, folks,’ and it worked … It was honest, it was worthwhile… Set the culture early and I think it makes a big difference.”