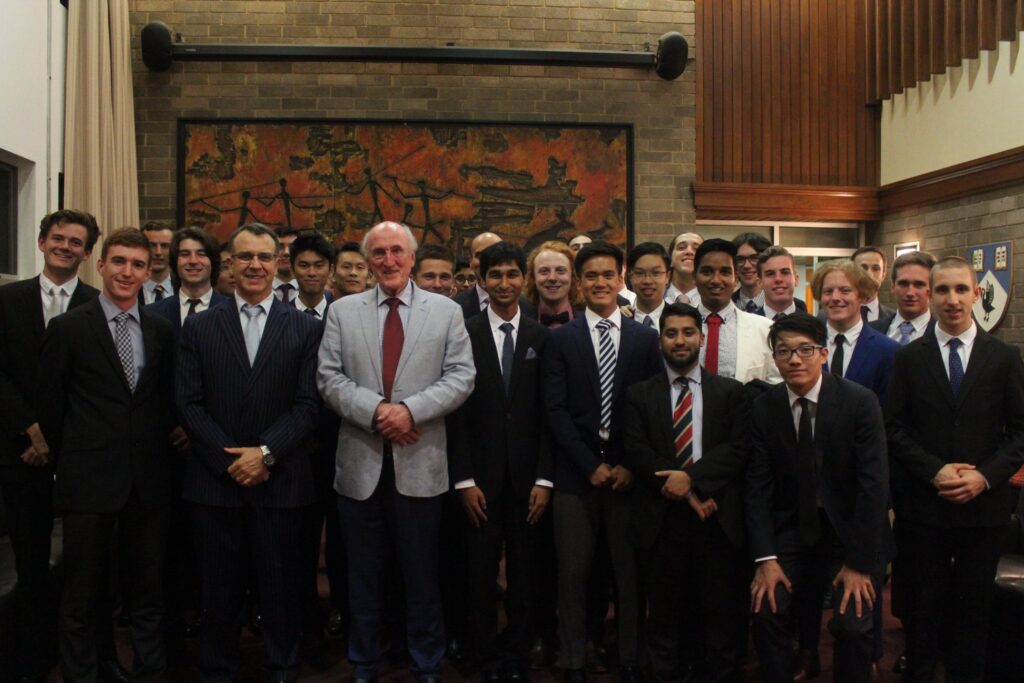 On 27 March 2019, Emeritus Professor Ian Sloan AO was the Wednesday night guest at Warrane College. He spoke to the boys about the rich heritage of the Royal Society of New South Wales, of which he is the President. The society is the oldest learned society in the Southern Hemisphere, with the purpose of advancing knowledge through the encouragement of studies and investigations in Science, Art, Literature and Philosophy.

“The Royal Society of NSW dates back to the colony, which is 1821… It was started by some people trying to escape the realities of the prison colony I suppose, and really trying to introduce some intellectual activity,” he explained.

While the same society in London focuses on just science, the NSW society looks at science together with art, literature and philosophy. “A 19th century formulation of all of knowledge,” said Sloan.
Sloan spoke to the boys on some lessons he had learned from his career – lessons which he felt also applied in life.

Sloan started out in physics, is currently a mathematician, but is dabbling once more in physics, as he told the boys. “But I am in fact an active mathematician,” he said. “I’m publishing; I’m working like a dog… There seems to be the idea that mathematicians burn out very young… well I didn’t come into mathematics until I was over 40!”

He explained that perhaps the mathematicians who burn out young are the ones that don’t move, so to speak – those who try and dig deeper into what they’re doing rather than try anything new.

“So what is the secret of being able to survive? Not only in mathematics but in life in some sense? Don’t stay in the same place; don’t keep doing the same thing over and over; try and keep moving. For me, it is finding new things – new things to do… I find you can move easily enough.”

“Mathematics as a whole is becoming much more fun. Because it is much more collaborative now,” said Sloan. Here, his tip was about working with others: and so sharing what you know, and learning from them.

“So one secret is to have many collaborators…it means that you have to work with a lot of people,” he said to the boys. “Collaborators – and I think there’s a lesson in life here too – good collaborators teach you things you didn’t know before, they will take you into new areas… you couldn’t do it on your own, because each of you has special skills, special attributes.”

Another piece of counsel Sloan had for the boys was to be daring.

“Be brave! That’s very important advice in research, and in life! Don’t be afraid to fail… keep moving, keep learning. .. I mentioned why I think people get stuck, they might keep learning but in a very narrow range… The whole of life from the moment you’re born to the moment of death is a process of learning… I recommend it as a way to stay young, as a way to stay active,” he said.