An evening with Louise Waterhouse, Hon Consul for Tonga 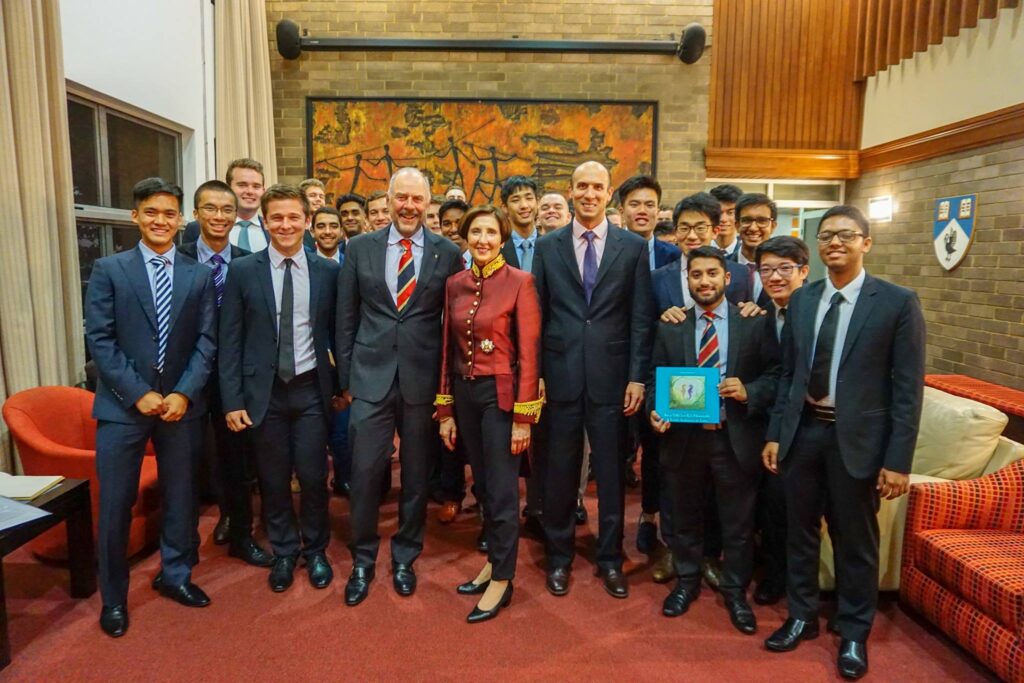 On Wednesday 17 April 2019, the young men of Warrane College heard from Louise Waterhouse at their weekly formal dinner. Waterhouse, the Hon Consul for the Kingdom of Tonga, shared her love and passion for the island nation, and explained a bit about her role.

And with around 25 Warrane men soon headed to Tonga for community service work, she thought it a good opportunity to enthuse them. “I want to inspire you… about how it is possible sometimes to change the world, even just a little bit… At the end of the day, whatever you achieve is worthwhile.”

The role of an honorary consul

“So you may ask, what does an honorary consul do?” she asked. “Well first, it’s exactly that, an honorary and unpaid role that requires significant funding… we’re regarded as our own hands-on charity. It’s our way of doing something for the community that we feel very good about, and it’s our way of giving something back.”

Waterhouse went on: “It does take up a lot of my time, and my husband often jokes to his friends, ‘My hobby is golf, and Louise is looking after the Kingdom of Tonga!’ I don’t have a job description, but I see it as my privilege to be able to do whatever I can. I’m in a position here where I can do what I can, perhaps open doors… with my role, I can make a difference… to argue the case for Tonga.”

Waterhouse explained that her day-to-day might involve sourcing donations, medical equipment, and supplies for Tonga, issuing people with emergency passports to get back home, and looking after royal and government visitors.

A little on Tonga

Waterhouse told the young men that Captain Cook had a soft spot for Tonga, giving it the nickname ‘the friendly islands’ and visiting on each of his three voyages.

“I always like to say that Tonga is for travellers, not for tourists,” she said. “What you see is what you get – you get a genuine experience, you get an experience where the people really love to see you… That’s what I find so endearing about Tonga.”

Made up of 173 islands, Waterhouse told the young men about the wonderful resources of fish and minerals; and of some pristine islands which remain untouched. She spoke of how its climate is similar to Hawaii, and how it is home to abundant sea life, underwater caves, ship wrecks, and surf to challenge the keenest surfers. But Waterhouse assured the boys that Tonga’s crowning glory might just be its whales, since it was the only place in the world you can swim within five metres of majestic sea animals – with a guide of course.

She told the young men how church is a very important part of life there: “And if you go to church you’ll get the best singing you’ve ever heard.” She told them how Tonga had the greatest uptake of religion in all the Pacific islands because missionaries converted the king first and the people followed.

“There’s an interesting story about Tonga being the only indigenous country in the Pacific to escape the fate of being settled and lose control of its land through colonisation,” said Waterhouse to the young men. “So unlike many developing countries, they’re actually happy to see you… They’re not resentful… When the Westerners came, they came to share knowledge.”

It was no secret that Waterhouse has a great love for the Kingdom of Tonga. She told the boys that it has one of the highest rates per capita of doctorates, because the people see education as such an important part of their lives. And it also has the highest number of sporting stars per capita in the world. “Why?” she asked. “It’s about the people… like Warrane College… about the strength that you get from working together, having values, and helping each other.”

She described the people’s passion and pride for their country. “I always think Tonga punches above its weight… for a small island, we all seem to know about it!”

As for her role and what it can teach the young men, she said the following: “Yes, we can move mountains; yes, we can do something very special if we keep on with generosity of spirit… I think the message I’d love to leave you with today is the old adage: it’s been said time and time again but really comes home true to me, and that is: ‘Ask not what those around you can do for you, but rather what you can do for others,’ because it will reward you time and time again.”