An evening of Q&A with Archbishop Anthony Fisher 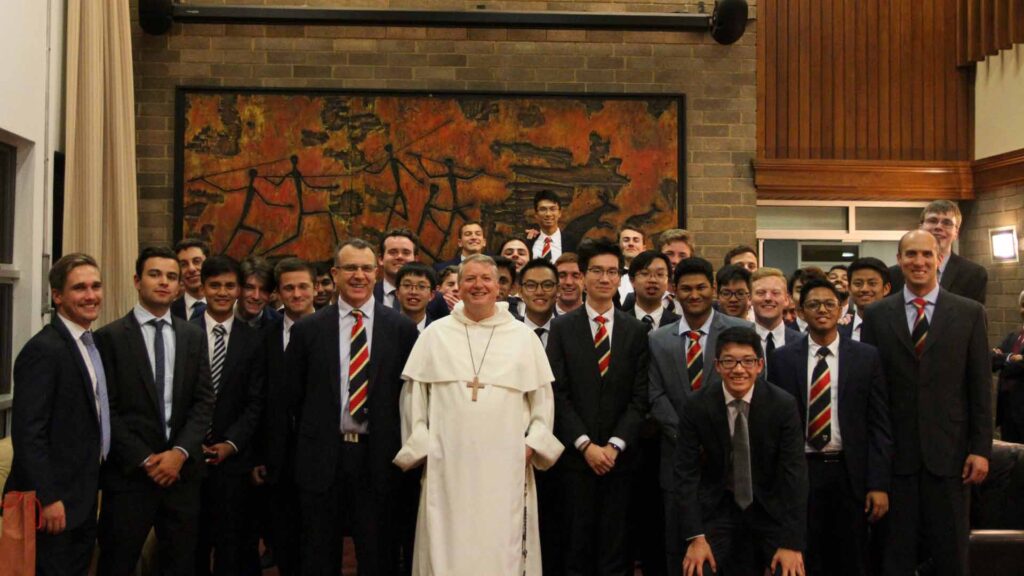 An evening of Q&A with Archbishop Anthony Fisher

On 6 November 2019, Archbishop Anthony Fisher visited Warrane College as a formal dinner guest. Amongst wonderful performances from the young men of the college, the Archbishop took part in a Q&A session which covered topics from his personal experiences to how to defend the faith’s position on certain ideas – all hot topics.

The trial of Cardinal Pell

The first question for the Archbishop was on the conviction of Cardinal Pell. He was asked whether he thought it to be a miscarriage of justice, as well as how the Church should respond to negative press.

He said, “We know that two juries tried the matter, and one wouldn’t convict or couldn’t convict. Two courts heard the case, the other on appeal split 2-1, and now it’s going to go to the High Court. Clearly it has divided courts, juries and judges, it’s divided the community and it’s divided the commentators as you say. There have been serious commentators – top lawyers, jurors and others who, having followed the case, have grave misgivings about the conclusion of it.”

The current state of the Church

Another question for the Archbishop was about how the church can address how it’s going, especially in a world where many say that they have no religion. “There’s lots of things I would like to say about that,” he started. “Firstly, religion is on the rise, not on the decline… the proportion of the world who are believers in God keeps rising… The proportion of the world that thinks there is no God is declining… But in a country like this one or the United States or Europe, it feels very different… It doesn’t mean they don’t believe in God or religion… It’s that they don’t want to identify with any particular religion… I think there are lots of different reasons that people say “none” for religion, but it doesn’t necessarily mean they’re not spiritual… And I think at moments of great suffering or crises in people’s lives, there is an opportunity for conversation just to offer our love or wisdom as it is… And we never write anyone off.”

On non-Catholic viewpoints in Catholic schools

One young man of the college asked the Archbishop about what he thought of cultural Marxists in Catholic schools teaching their non-aligning views to the kids. Archbishop Fisher responded, “The Catholic school system is the biggest non-government employer in Australia; the biggest charity in Australia – it is huge. And to find teachers of faith and morals, and enthusiasm for catholic faith and morals, is not easy; and to form them well and support them well. And as we all know, even among our student body, there are all sorts… all sorts of backgrounds and beliefs and actually, they’re generally speaking, very welcome.”

He went on, “If you’re going to use the podium of a Catholic school teacher to campaign against the Pope or against Christ or the Bible, it’s going to become troublesome. You’re probably in the wrong place employment-wise… But within Christianity there’s such a broad range of people and ways of backing it; it’s interesting that so many non-Catholic parents and non-Christian parents want their kids in our schools – and that so many non-Catholic and non-Christian teachers just want to teach in our schools. So there’s something there they think is special and they want to share in, and if we can make space for that, it’s a good thing. But we have to have a strong sense of our own identity, our own mission, our own beliefs, if we’re going to have that something special to offer the world… So I do think we have to be constantly working on challenging our leaders, our staffs, our families, and our young people: what do you stand for? What are your ideas? Are you comfortable with what Jesus Christ stands for, what this school was built for? And for some people it would come down to it would be hypocritical for me to stay here, and for some… they might want to keep the conversation going.”

When asked about how to explain the Church’s reasons for not supporting Marxism, the Archbishop had the following to say: “There is actually a lot in common between Marxism and Judeo-Christianity – they actually come out of the same world. So the passion for the poor that many Marxists would have, for a more just world, has deep roots in Judeo-Christianity, so we must be careful about saying about any person or belief system ‘it’s all wrong’, that’s unlikely to be the case, there’s likely to be a lot that’s good there, a lot that’s true there, and we have to be willing to hear that… But amongst the things that would trouble me about Marxism is that it’s fundamentally materialistic. I don’t mean in the sense of people grasping for money all the time… But that it thinks all that there is is what you can see and control and turn to production, distribution and exchange. Whereas Christianity would say there’s a lot more to this universe than that: many things seen and unseen; a transcendence to this world. A second troublesome thing for me, about Marxism, is its fundamentally deeply divisive mentality. It insists that progress comes through violence, or class warfare, or through one group being against another group. And I suppose then again the Christian world vision would be seeking progress that comes through reconciliation – through uniting rather than dividing… And I suppose a third, and there are a lot more things we could say, but a third thing that troubles me about some Marxisms is that it seems to reduce morality essentially to social justice. The moral life is much richer than that… to put everything on the economy puts too narrow a reading on the human person for me.”

On faith and science

The Archbishop was asked about the supposed dichotomy between science and religion, to which he had the following to say. “I have not the slightest problem with science. I love science!… I think the study of science should make people more inspired by creation and by whatever is behind it, not less. The more you know how wonderful this universe is, and how it works, in all its complexity and its simplicity, the more it should , I think, drive you to think, ‘Wow if that is there at all, and has so much that is so good about it, there is something behind it that’s worth exploring’. I don’t think being a lover of science should put you off religion… You’d be put off if Christians seem to be confrontational when it came to science… In fact, many of the greatest scientists in history have been religious believers… We shouldn’t see these as enemies in any way – they needn’t be, there shouldn’t be. Thomas Aquinas said, ‘Anything that is true, if it is true, is from the Holy Spirit’. We don’t need to be frightened of any truth.”

The Archbishop’s own story

Upon being asked to tell the young men a bit about his own story and his experience of faith, the Archbishop started by saying, “I used to be a total pagan, all I lived for was my next drink. The whole universe was for me, as far as I was concerned. And then on the 3 April 1960 I was baptised. I was three weeks old. And it all changed from there.”

In all seriousness however, he continued: “I do believe I received the gift of faith on my baptism and it has been a tremendous gift in my life. And I have gone through ups and downs, and times where I’ve been hotter or colder with respect to my faith, and it doesn’t quarantine you from big challenges. Some of you know that about three and a half years ago I got very sick, I nearly died. I had Guillain-Barre syndrome, I was paralysed from the neck down five months in hospital. Had to learn all over again how to walk, how to use cutlery, how to hold the chalice – everything, like a baby. And I was in terrible pain for the first few weeks until they got that under control. And like any human being, you’re going to ask why. What sense can you make of that? So I don’t think people of faith are somehow quarantined from such challenges at all. I think I learnt some things in that process. I do believe I was held up by peoples love and prayers for me, and there were huge numbers of those – expressions of those. And I was held in the hand of God…I experienced love and grace differently… I’d never really been sick before, and now I was powerless… and yet in that, faith gave me some sense to make of it, some consolation, some support. Now I could well understand someone else going through the same experience might lose their faith.”

Discovering his vocation to priesthood

When asked what inspired the change from being a lawyer to becoming a priest, the Archbishop said, “I actually loved practising law… I had had in my heart from when I was about 15 that maybe the best me would be a priest. That that would be where God wanted me to be, where I’d be happiest, where I’d do the most for the world. Which was not to say I couldn’t have done a lot of good in other places, or that other people don’t do a lot of good in other ways… But for me, I’d had this sense that maybe the priesthood was what God was calling me to. Calling sounds a bit like you’re hearing voices, I wasn’t hearing voices, but I tried to discern where my gifts were, where I would put them best… This kept coming back, despite enjoying law… It took me until I was about 25 to enter a religious order… It wouldn’t go away, this thought that the best me would be a priest. And I love being a priest! Being close to God and close to people… Of course it’s got hard times and boring times, but it’s got wonderful times.”

Loving your faith without shutting others out

The Archbishop also spoke about being open to other faiths – and being sure in your faith whole being exposed to other faiths. “Unless you’re in some kind of cult, you’re hopefully going to have friends of different faiths, people you admire of different faiths, you’re going to read… So unless your mind is closed or your eyes are closed or your heart is closed, you are going to know there are lots of other options. And hopefully feel something of the pull of them too. I certainly have friends of many different faiths… and I greatly admire these people and their faiths. So I’m not saying the only good is to be found in my church… I think that other faiths challenge me and us in all sorts of ways, including to be better at what I am so that I can have a genuine dialogue with them and being open to what is good and true in their faiths.”