Advice from the Master himself – Gerald Fogarty 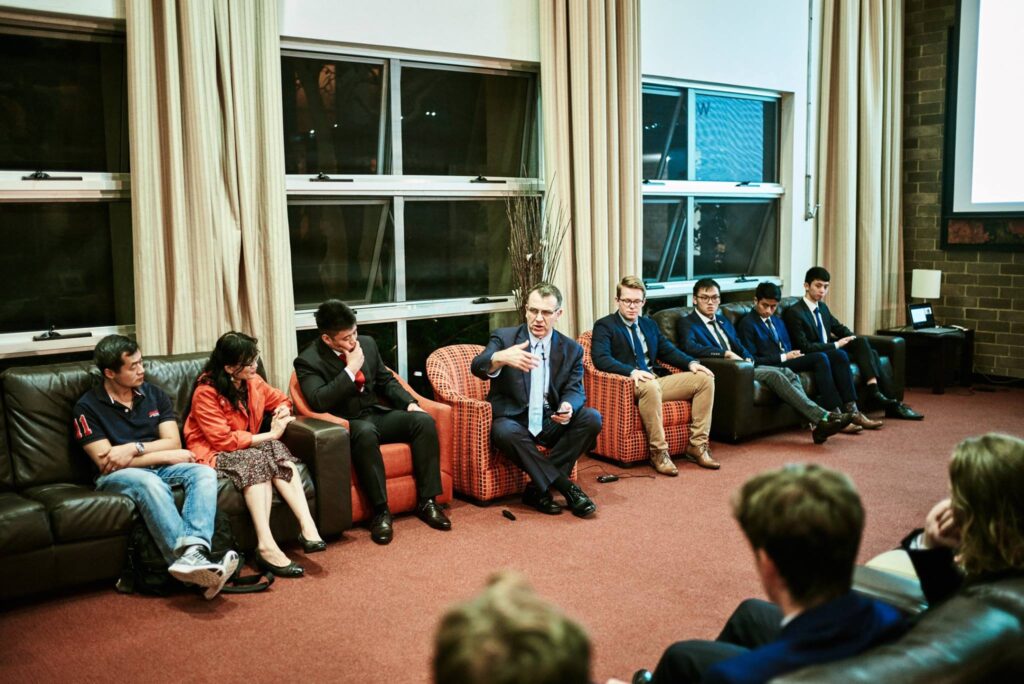 On Wednesday 3 April 2019, Warrane College’s own Master, Professor Gerald Fogarty, took the floor as the formal dinner guest for the week. Director of Radiation Oncology at the St Vincent’s Clinic and St Vincent’s General Hospital, he is also on staff at the Mater Hospital, Melanoma Institute of Australia and the Skin & Cancer Foundation Australia in Sydney.

Fogarty trained at Peter MacCallum Cancer Institute, Australia’s largest cancer centre, and is a recognised authority in the radiation treatment of skin cancer, with a PhD in modern radiation treatments of skin cancer and over 100 publications to his name.  His passion for radiotherapy was clear as he spent some time talking to the young men about his work, and explaining to them its benefits versus surgery. He described how surgeons cutting out cancer take out good tissue along with the bad, whilst radiotherapy can target an area and if done properly, the good tissue can repair overnight while the cancerous tissue cannot.

He went on to speak a bit about failure, some concerns he has about the medical profession, and other bits of general advice.

“Oftentimes we do face failure – I’ve faced failure in life, but it’s amazing how good things can come from failure,” said Fogarty to the boys. He told them about obstacles he came up against in his journey to medicine – such as missing out on the cut-off to get in by one mark, working super hard but still failing exams, and not getting into the physician training he initially wanted. While these things seemed so terrible at the time, they eventually led him to discovering his passion: radiation oncology.

Another difficult moment in Fogarty’s career came just as he was about to start radiation oncology training. At this point, Opus Dei (of which he is a member), asked him to be the Dean of Warrane College. It was a big decision but he thought it was the right one, even considering the career sacrifice that it meant for him. What started off as a two-year role became 12 years before he continued his training. “But I learnt a lot about people management, and learnt a lot about myself,” he told the boys. “I spent 12 years out of medicine… but ended up getting into the best program for radiation oncology in Australia.”

Fighting the culture of death

While Fogarty loves his work, he did talk to the boys about the concerns he had for the current state of medicine.

“I’m part of an industry that is implicated in the culture of death; that really concerns me,” he said, referring to the existence of things such as abortion and assisted suicide. “People go into medicine to heal people, in order to alleviate suffering; we don’t do it to kill people. And we’re asked by the community to kill people…”

He went on: “There have been many times in my life where I’ve been asked to do a termination of pregnancy and I’ve refused, and my comeback to them is ‘Convince me mate, convince me; that a human being does not die in termination of pregnancy. Convince me and I’ll do it.’ They never have an answer for that… Medicine has been completely perverted to be able to serve big business and money … it’s all about the money. And euthanasia is coming very soon… If people want to kill themselves, fine – but why do we have to do it?”

Other pieces of advice

Fogarty finished off with some more general life advice for the boys.

“I learnt very early on in life… you’ve only got one chance to stuff a first impression,” he said, something particularly important for him as a doctor dealing with patients. “In that moment, you are establishing rapport and trust.”

“Dress well,” he went on, telling the boys how his colleagues always wonder why he bothers with a suit and tie in a modern world where it’s acceptable to dress down. “When I get asked why I wear a suit and tie, I say it’s because I care about the patients!”

Fogarty went on, “It’s always good to live honesty… if you’re honest all the time, people will trust you. And if you have failures, say it straight, don’t try to cover it up.” He also spoke about gratitude – “When people thank us for what we do, you just feel like giving them more! It’s an amazing thing” – as well as the importance of preparing well, taking initiative, reflecting on the big picture, and maintaining connections such as those made at college. He encouraged the boys to help people in their need, and to be happy for them if others do well rather than getting resentful.