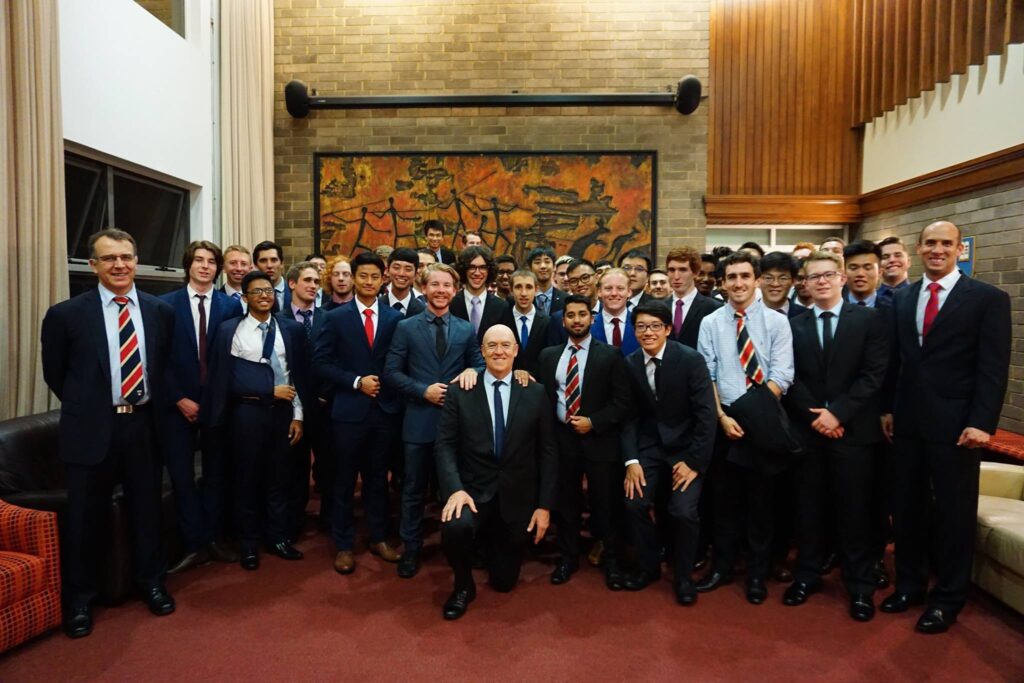 On Wednesday 6 March 2019, Warrane College welcomed former resident Dallas Watts to be their formal dinner guest. Watts, who lived at Warrane in 1978-79, is now both a singer and educator. His repertoire includes over 350 performances, 36 operas with Opera Australia, a win at Tropfest, 17 large-scale theatre productions and singing backing vocals on the official CD of the 2000 Sydney Olympic Games. In 2013, Dallas was invited to be the first Lecturer in Voice at UNSW, where he currently teaches, as well as running a busy studio in the CBD.

But even with all this to his name, Watts started by saying that being at Warrane was his biggest honour to date. “Warrane College changed my life. I was here 41 years ago… It’s the launching pad for great professional and personal lives… I am quite sincere to say that this is the deepest honour of my life. Why have I travelled 2.5 hours to get here? You are more important than I am, and I say that with all sincerity.”

He continued, “I want to say to you tonight that people – relationships – are more important than achievements. And I definitely wouldn’t have said that when I was your age, so that’s my opening statement.”

Watts had fond memories of his college days, as he shared with the boys. In particular, he shared the impact of certain people who helped him along the way.

“I want to dedicate this speech to a man who changed my life many years ago,” said Watts to the boys. “Seamus Grimes was a very unassuming man; he was a tutor on Level 2, and his personal sacrifice to…come serve the students at Warrane College changed my life forever. He was very funny and had a wicked sense of humour. He took me as a struggling student who didn’t do well in school, and made me an academic star in one year…”

“Seamus Grimes was a lay member of Opus Dei… he was a team player and a hard worker… He was interested in developing people…. and taught me how to use time wisely and how to memorise factual detail; more importantly to analyse…. I would never have achieved what I achieved in my life without him…”

“I realised that great achievements come from great relationships. For a student to achieve success in something, someone has to believe in them first. A mentor needs to believe or trust in their student, in order for that student to succeed. For people to be successful in their professional lives, all they need is one person – the right person in the right position – to believe in, foster, or indeed trust their talent… Basically you only really need one person to believe in you, as Seamus did with me, to make you successful, and that is a huge thing.”

He went on, “Our famous deputy master, Dave Bolton, also changed my life… he was all about passion… as are all the tutors here… don’t take them for granted like I did! What Dave Bolton said to me and to others…is true: once you find your passion and what you love, you don’t have to work again. This is really important. I suppose what I’m here to say to you tonight is, what will your opus or your work be?”

“The thing that sets Warrane above other colleges… is that it really does stand for excellence; that you really should do your best, and second best is not an option… If you’re here, you’re here for a reason. I almost didn’t get in and I’m so thankful I did.”

On conflict, suffering and growth

“I want to talk about conflict, suffering and growth,” Watts went on. “You can’t grow in your life unless you suffer in a sense, and are involved in conflict in your personal life. This is very important – don’t run away from conflict.”

Watts recounted a moment he had over coffee with Australian film director Peter Weir. Weir told Watts that to have creativity you must experience conflict, explaining how he based the school life in one of his most iconic movies, Dead Poets Society, on a repressive school that he had attended as a student.

“The great paradox of me being here today is that I never got what I wanted… never got to be a superstar opera singer even though I really believe I deserved it… that sounds terribly vain! But I got much more, you see… I think that with God and the Christian life, the more you give up, the more you receive…

Watts finished up in style by singing for the boys.