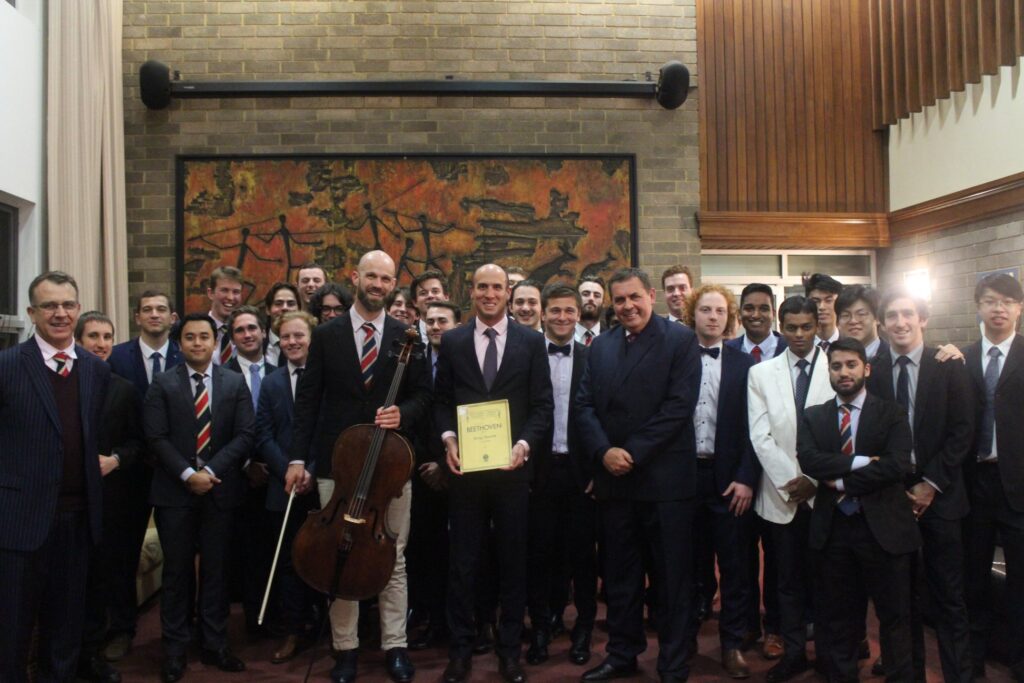 On Wednesday 12 June 2019, Warrane College welcomed old boy Christopher Pidcock for their formal dinner. These days he is a cellist with the Sydney Symphony Orchestra. “Being part of the Sydney Symphony is a pretty amazing thing; each week we encounter some of the best conductors… to sort of just grace us with their knowledge and wisdom and idea of an orchestral sound. And we sort of go along with it and really hope that they inspire us, because if we’re inspired we inspire our audience,” he said.

Pidcock was happy to be back at his old college, and shared with the young men how things had changed and also how they hadn’t, which made him feel quite at home. He played a number of pieces for them on a very special cello, which he told the young men about.

“This cello was actually made in Bologna in 1710,” he said. “It’s honestly one of the most extraordinary instruments I’ve ever played and it brings me great joy… it’s been played for 300 years by top professionals. You just encompass the lives and the careers of all these people who’ve played it and it’s suddenly given to you in this instrument! You’re just given so much confidence when you play an instrument like this!”

When asked about how a great cello is made, Pidcock explained: “Look at this cello… the back is bloated coming out… it’s got quite a round body. Now these are built on flat surfaces so these are plateaued into this shape over 300 years, so cutting the wood in a way that allows it to plateau like that. And why would you want it to plateau? Because that roundness is what gives it that crunchy, brilliant sound that projects. If it’s flat, when the different sound frequencies hit it, it probably sizzles more on the front but doesn’t necessarily penetrate to the back of the cathedral… the best quality maple and poplar were used by the makers… And the maintenance is just don’t bump it, look after it, keep well aware of the humidity levels.”

Pidcock has already enjoyed a vibrant career that includes playing at the 2008 International Cello Congress in Israel, first prize in the 2007 Gisborne International Music Competition in NZ, and European tours with the Australian Youth Orchestra and Sydney Conservatorium Chamber Orchestra. Currently, he is doing a doctoral thesis which looks at ways to reinvigorate performances of Beethoven’s music.

“I guess conducting or composing more is maybe the next stage for me because you do have a lot of influence in those positions,” said Pidcock to the young men of the college. “Because if you can generate an incredible sound from an orchestra, that’s hopefully going to have a big impact on the people that go to the concert that week.”

He went on, “And that’s the whole point of music really, to enrich people’s lives and bring them closer to God; and bring them closer to seeing the great mathematics in music… Music obviously has an ability to bring us peace and comfort us, but it has many more capabilities as well, and we shouldn’t ever basket what we think music is meant for in our lives.”