A case for reason-based inquiry with Dr Donald Hector 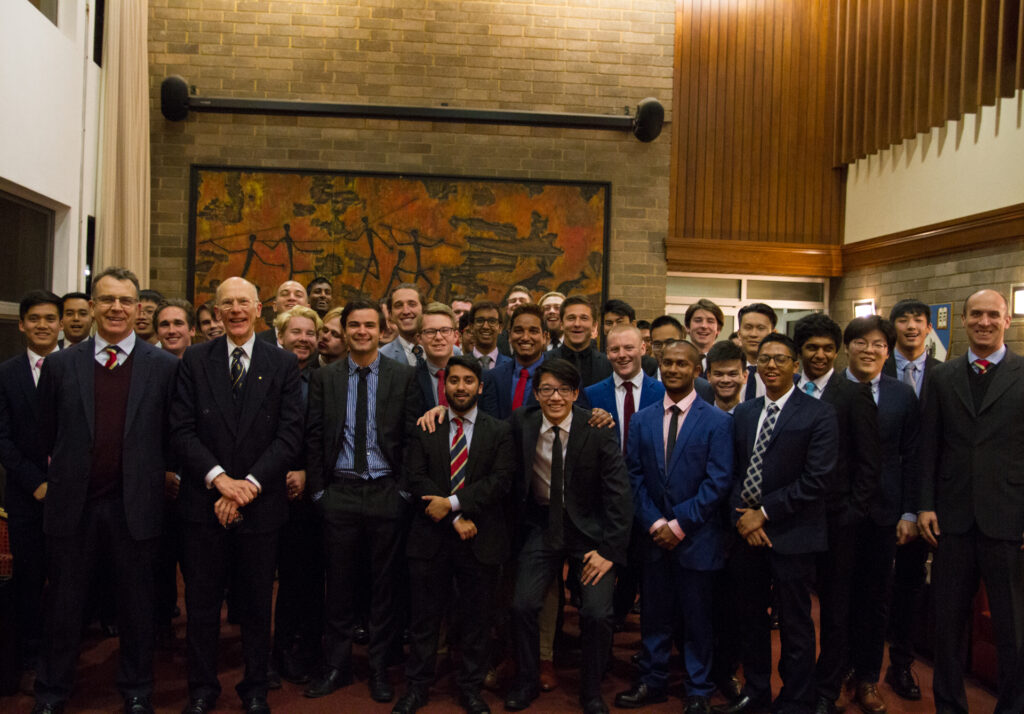 On Wednesday 19 June 2019, the young men of Warrane College welcomed Dr Donald Hector AM as their formal dinner guest.  Based in Sydney, he has extensive experience in large-scale industrial processing and the evaluation and commercialisation of new technologies – including time as MD for Dow Corning Australia, MD of Asia Pacific Specialty Chemicals Ltd, and non-executive chairman and director of ASX-listed and private companies and not-for-profit organisations.

He started by informing them of the following: “In the 20 seconds or so that I say this sentence, about 20,000 tons of carbon dioxide will go into the atmosphere as a result of burning fossil fuels… about four million tons went in since we started dinner tonight. Since humans started burning fossil fuels 36,000 million tons of CO2 have gone into the atmosphere from this activity.”

Hector went on to tell the young men about his current work, on technologies that makes the likelihood of getting to a competitive position for large-scale battery storage in utility-scale solar farms look viable.  He was co-founder of Gelion Technologies, a company started by Thomas Maschmeyer, a professor of chemistry who invented the technology.  So far, the company has raised significant funds to commercialise the technology, and is now in the stage of manufacturing development so as to introduce this to market. Later on, he also answered questions on solar power versus coal, nuclear energy, and economic technology for future generations.

However the largest topic he covered was something naturally close to the heart of a scientist: reason-based inquiry.

The importance of reason-based inquiry

“Everything I’ve talked about now leads me to a much more important question in many ways,” said Hector. “My whole background in life has been in science and technology. Science is the acquisition of knowledge and technology is applying it for the betterment of mankind. And it’s all based on the scientific method… which came out of the Renaissance…”

He went on, “One of the defining characteristics of the renaissance was that scholasticism was replaced by humanism so the individual became of paramount importance. And that’s not to say that mankind replaced God… what happened was that the immediacy of God’s intervention in the world was largely replaced by the concept of God creating a universe according to grand principles and grand rules. And people realised that if they use a certain way of enquiry, they could understand those rules and laws by which the universe functioned, and we could really come to terms with… why we exist and how we exist. And that led to enormous advances for mankind…”

“This whole notion of reason-based enquiry… so we can converge on truth… really is at the heart of our open democratic society we enjoy today… Now the reason I’m raising this is I think there’s a great tendency in the world today to move away from that approach. An approach that has given us this prosperity, and has defined the institutions we see as important… things like a free press… fair courts…”

“But coming back to this subject that concerns me most, about this loss of this rational, reasoned approach in the way in which we conduct our lives, another complication with the enormous complexity we have now, it’s almost impossible for one person to have a real grasp of the breadth of all the knowledge there is in the world and how it fits together… So knowledge has become much more concentrated, people become very restricted to one area of knowledge that they pursue and become expert in.  Because we struggle to deal with the complexity, we tend to fall back on all belief systems when reasoning fails us.  And of course those people then become the advisers in establishing public policy…”

Hector went on to speak about the effects of this in society dependent on social media, and the need to always strive for the truth. “We’re starting to see cracks appear in the way we treat information… this group of people here is representative of tomorrow’s leadership… so I think it’s of critical importance that we don’t allow the erosion and corrosion of our public institutions… I think we have an obligation to evaluate everything that’s put before us in terms of fact and reason. We need to clearly distinguish between the truth and falsity… We should not accept the sorts of things that get put out into social media by our politicians if they are wrong; they should be challenged and diminished immediately…We need to protect the institutions of society, we need to criticise them when we think they’re wrong, but we need to support them in times of adversity.”