A better understanding of homelessness with Dr Carlos d’Abrera 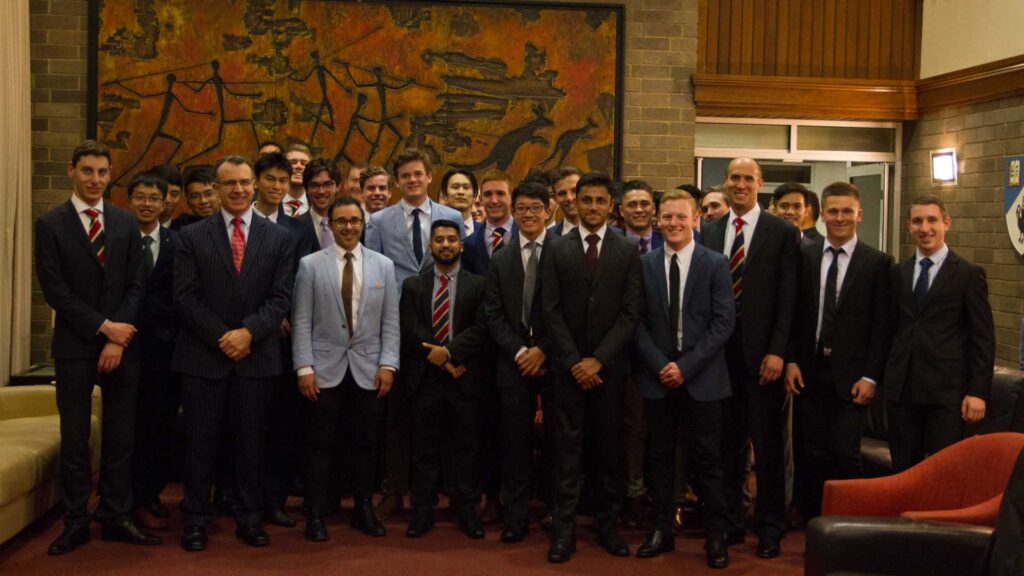 A better understanding of homelessness with Dr Carlos d’Abrera

On Wednesday 16 October 2019, Warrane College welcomed Dr Carlos d’Abrera as its formal dinner guest for the evening. A Sydney-based psychiatrist and a Research Associate at The Centre for Independent Studies, d’Abrera has worked in public hospital and community mental health services across Australia and the UK.

D’Abrera has a key interest in the role of public health policy in addressing homelessness, and has written a ground-breaking research report on the myths and realities of ending homelessness in Australia. This topic of homelessness was also one which he wanted to share with the young men of Warrane.

He began, “I’ll actually start with a joke… it’s not mine… ‘Is it just me – is homelessness getting worse, or is camping not what it used to be?’ I’m aware that you gentlemen are from a diverse range of backgrounds, but I’m sure we all agree that homelessness is a major problem in Australia… Current efforts to reduce homelessness don’t appear to be working. In this presentation, I hope to dispel a number of homelessness myths… I’ll also propose some solutions, some controversial and some less so, which in my view have not been adequately trialled in this country.”

The stats and the reality

“First of all, a question: how many homeless people in Australia?” was a question that d’Abrera put to the young men. The guesses ranged from 10,000 to 100,000. D’Abrera went on, “The ABS tells us that there are 116,420 homeless people in Australia. That was in 2016 and the numbers are about the same now. Now that number has grown… a 30% increase over the past decade. This is clearly a worrying problem…”

“But in fact, that number of 116,000 is a questionable number based on an inflated figure. Let me explain. Australia has one of the broadest definitions of homelessness in the OECD. It therefore has one of the highest rates recorded per capita. But prior to 2012, homelessness in Australia was defined more narrowly and stratified according to severity… Later Australia was called to widen this definition…”  D’Abrera  explained that the definition began to include situations like overcrowded housing (such as that often used by students from overseas or cultural groups that prefer living in shared spaces), or housing that wasn’t considered safe – and these additions are what constituted the bulk of the seeming increase in homelessness.  And these added numbers allowed the lobbying of government for more funds. “But this distorted figure doesn’t differentiate between levels of severity of homelessness,” said d’Abrera, explaining that therefore, someone sleeping on a park bench is considered the same as someone in overcrowded accommodation. “This results in distorted resource allocation… that figure of 100,000 drowns out the noise of those most in need… the people that we see under the bridges at 3am, in the middle of winter, in a sleeping bag.”

“It’s much easier to talk about homelessness in sweeping terms, talking about affordable housing, employment opportunities and so on and so forth, but at the same time ignoring, perhaps unconsciously, the needs of the most desperately homeless… In actual fact, the number of people sleeping on the streets hasn’t really increased… Now this doesn’t mean we don’t have a homelessness problem, we most certainly do… but the government is spending millions of dollars a year on this problem and getting nowhere…approximately $100,000 per rough sleeper per year! But we are unable to exit them from the streets.”

Common misunderstandings when it comes to homelessness

D’Abrera went on to explain some of the misunderstandings around homelessness, which contribute to the lack of results in helping people get off the streets. “To understand why we are failing, we need to examine the orthodox understanding of the causes of homelessness and why it is deeply flawed… Individual attributes we might think about include gender, culture, age and personal choices such as drinking, smoking, drug abuse and perhaps criminality. Structural factors include things like economic variables, employment, housing affordability, labour markets and even social forces – intangible things such as racism and discrimination. But one of the most important Australian studies recently undertaken … looked at the journeys to homelessness of those individuals. And what they found, fascinatingly, were a number of counter intuitive findings that defied basic assumptions about why people become homeless. They found that risky behaviours – drinking, smoking and drug use – were the strongest factors for a person entering homelessness…They found that areas of our major capital cities that have the most affordable housing are also the areas where homelessness is highest; a counterintuitive finding… housing availability is not the main cause of homelessness….”

He continued: “This is why I have big issues with big sleep outs… because what this message sends is that homelessness can happen to anyone. Well, hang-gliding accidents can happen to anyone. But it’s unlikely that someone who doesn’t hang-glide is going to end up in a hang-gliding accident… The point I’m trying to make is that homelessness is very unlikely to happen to any of us in our lifetime. But it is likely to happen to people with mental illness who fail to take their medications… to people who engage in heavy drug and alcohol abuse… to people who get into abusive and domestically violent relationships… to people who repeatedly commit crimes and spend time in prison… to people who create noise, disruptive behaviour and do drugs in their public housing accommodation.”

“The extent to which conventional orthodoxy pervades academia… This narrative… avoids difficult judgement s about lifestyle and cultural choices. This is what we call the ‘social worker ethos’: a non-judgemental approach to social problems… Central to its ethos is the notion that subjecting victims of social injustice to paternalistic and judgemental approaches punishes the poor, violates human rights, and in the case of homelessness, violates the rights of people to sleep rough and on the streets. To this I would say, who would make a rational decision to sleep rough if they were in full command of their faculties? Outreach teams… have a certain moral paralysis and are terrified of appearing paternalistic. Their goal is not to remove people from the streets: I think this is an absurd proposition… it’s for this reason that their success rate in getting people off the streets is woeful.”

With this understanding of homelessness, d’Abrera suggested some ways to move forward. “Let’s talk about some solutions to the problem – what is to be done?” he said.  “Firstly, we need to stop doing what doesn’t work. In my view, talking about the problem of housing unavailability is unhelpful and distracts us from the main problem… Next we need to stop with these big sleep outs. It’s a waste of time; it overstates the problem; and makes the case it could happen to everyone. We need to re-evaluate the closure of stand-alone, long-stay psychiatric facilities such as the facility I work at, which exist since the deinstitutionalisation process which took place from the 1970s onwards where we cleared out our mental asylums. Where did these folk go? Well some went to prison, some died, and others ended up bouncing between the streets and hospital. Our psychiatric wards in our hospitals are woefully underequipped and woefully short of beds… We need to increase the number of homelessness hostel beds… We need to have more drug and alcohol treatment for people who sleep rough… even if they don’t want it… Finally we need to think about prevention… We need to be teaching students in Year 10 the importance of budgeting, of financial literacy, of delaying gratification, of sensible family planning, of not staying in abusive relationships… family cohesion… community and most importantly the importance of giving back.”